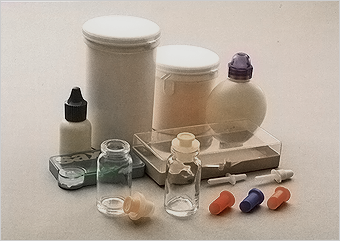 Since 1952 General Plastics have devised and produced, strictly in Italy, all sorts of containers, special caps, plugs, droppers, vials for pharmaceuticals and for other purposes.

Most of them are produced based on design devised in collaboration with pharmaceutical companies.

Among them, the most popular one is the General Plastics system for blending two components (medicins or cosmetics). It consists of 3 components: a reservoir plug that closes a single-use bottle containing liquid or syrup; a piercing plunger having a sharp end which allows for the reservoir bottom to be broken, a security cap which closes and seals the whole system.

The bottle containing the liquid is closed by the reservoir plug, whose inside contains the active ingredient.
The piercing plunger is then inserted into the reservoir plug and finally the security cap is slipped on the bottle neck to protect the system from contaminations and from unvoluntary blend of components.

At the time of use, the security cap is torn and removed, the piercing plunger is pushed down, so causing the reservoir bottom partial opening, and the active ingredient drops into the liquid where it dissolves.

The critical side of this kind of systems usually is their poor tightness, specially when the room temperature has sharp changes that can cause different components’ expansion.

After long and careful researches General Plastics succeeded in realizing the phenomena causes and in developing the right technical solutions to the problem.